The Power of Routine

Someone was telling me recently how they have a terrible routine, watching TV or playing games until late, sometimes falling asleep on the sofa and then getting up late.

They could easily have been describing me a couple of years ago. I thought I was definitely a bonafide night-owl type.

Today, I’m routinely up at 5:30 am and way more productive doing the things I want to be doing. I aim to be in bed, reading, by around 10 pm though that sometimes that slips to 10:30 pm. I could definitely improve there a bit. I still don’t sleep as long as I would like, but I’m getting more than I used to and it’s better quality so getting up early is much easier.

The power of habit

Self-control requires attention and effort and is a finite resource before it needs “recharging”. This effect has been comprehensively studied and is known is Ego depletion. It’s no surprise then, that at the end of the day when our stores are depleted we’re much more likely to succumb to the temptations of late night TV, video games or other bad habits like feasting on chocolate or carbs. It’s also another reason to do your most meaningful and effective work in the mornings when you are the most refreshed and have the most energy.

The key to counteracting this is ritual and routine. Usually, these words also call to mind others such as boring, tedium and so on. However, in this context, I really mean a sequence of actions regularly followed. Once something has become routine you no longer have to devote as much mental resource to do it and your reserves aren’t depleted as much.

I have written before about my morning routine. It isn’t static but evolves over time as something else becomes cemented and I change my focus or my season in life changes.

So, how did I turn my supposed night-owl behaviour into the early bird of today?

According to Mel Robbins, you only have 5 seconds from when you have the impulse to take action to force yourself to do it before your brain catches up and pulls on the handbrake and nothing happens. You need to find ways to make that 5 seconds feel longer and push past the laziness.

Here’s the only point you need to have some willpower or motivation. You have to force yourself to get moving. Like Newton’s third law, once you’re in motion it’s easier to keep moving. You just have to take that first step. I just needed to get out of bed. That lovely, comfortable warm bed. Here’s where you need to be absolutely clear why you want to do this. You have to be able to call it to mind to give yourself that push to get out of the warm bed and endure the cold, chilly morning air. Those first few seconds suck. After that, it quickly gets better 1.

Think about your key motivations, write them down and put them somewhere you will see them often. Make a point to read them daily.

Don’t try to change everything all at once. That’s a recipe for failure. Setting up a good, consistent routine is all about making steady progress. You have to do away with those that you’re trying to stop and replace them with better habits one-by-one.

Find one activity that you really want to start doing. If you were only to do that one thing, your life or situation will be improved. If you want to stop doing a bad habit, e.g. watching TV late at night, you need to replace it with something positive. For example, replace watching late night TV with reading a book.

In my case, I wanted to start meditating daily. I set myself a goal of doing 10 minutes a day. Anyone can find 10 minutes in a day, right? After several false starts, I realised that I needed to do it as early as possible before I filled my day with other activities. I decided to build it into my morning routine - such that it was at the time.

First, you need to find a trigger, something that you’re already doing that’s positive. This will act as your starting point. In the morning, for me, it was making a cup of coffee. In the evening, perhaps it’s brushing your teeth.

Link the trigger activity with the new habit you want to build. To build the meditation habit I made a coffee and then immediately went and sat in my chosen spot to meditate. Essentially we’re trying to create a sort of Pavlovian response for ourselves.

Our aim is to provide a trigger for your brain to cement a good routine and limit the time or opportunity to slip into the habits you’re trying to break. Use any tricks that work for you to hack your brain. I found it helpful to track streaks using a daily calendar chart that I keep in front of me on my desk to mark each day. When you start to waver — and you will — then it can give you that little push to not break the streak and get your new habit installed.

Whenever I want to start a new habit I print out a blank calendar template in Numbers and mark an X for each day I complete it. To track several at once, I use a more efficient list style that I can print out and tick them off together. Not everything is an everyday habit activity. For example, I aim to exercise three times a week. A list-style streak chart can work well for that too. I added checkboxes on the days I planned to do them so it’s easier to see the progress and streak even when it’s not an every-day activity. You can see in the example below I also kept the original Numbers spreadsheet and would check them off during my weekly review so that I have the totals calculated at the end to compare against my target for the month. 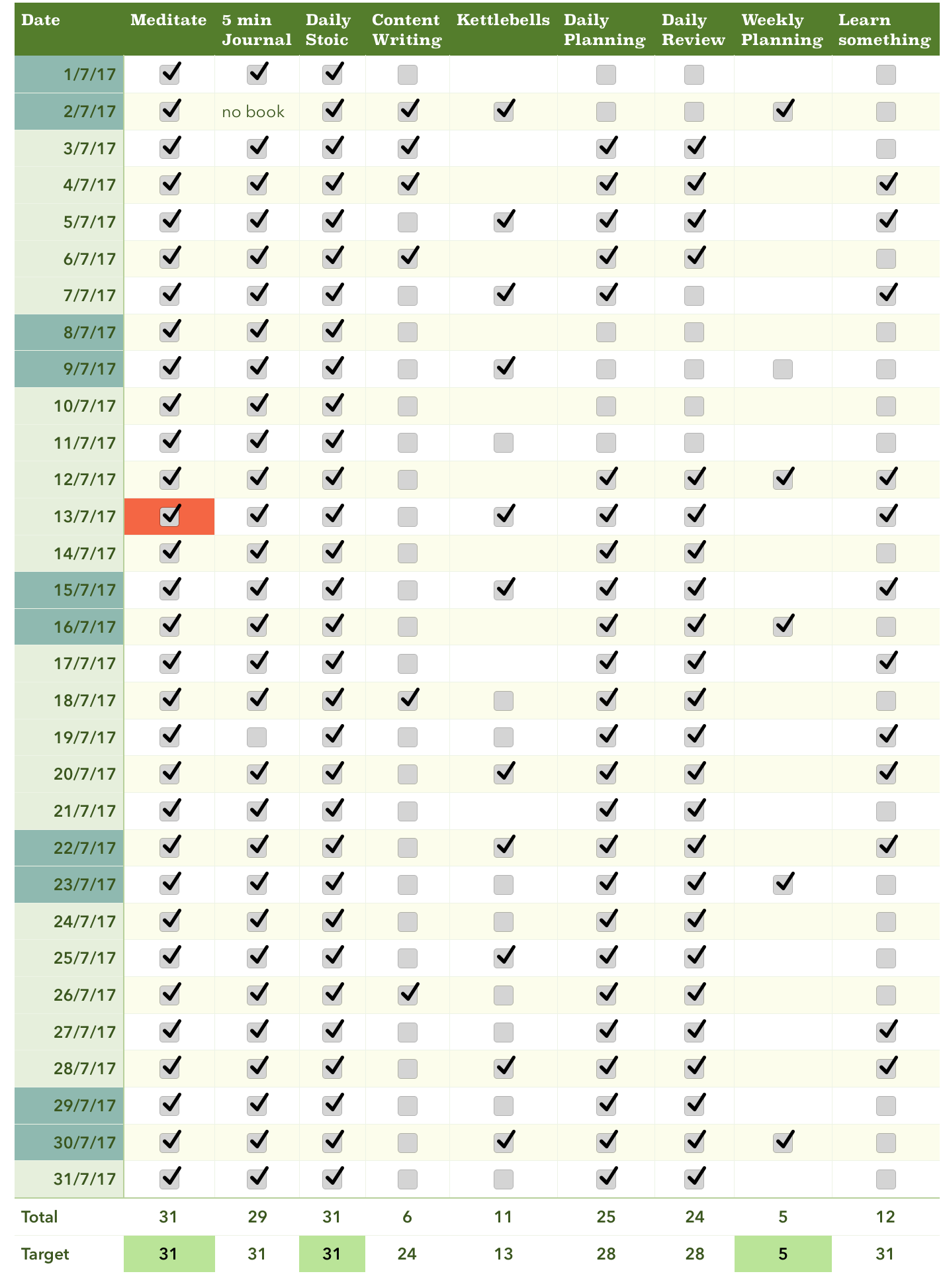 A tracker I used as part of an accountability month in my mastermind group - in case you’re wondering what the red is, that’s when I hit a 365-day unbroken meditation streak goal

Once your first new habit is formed (usually it takes around 30-90 days) then you can add the next habit. The previous habit becomes the trigger for the next one.

As you start adding activities, you’ll find it helpful to write them down as a list. I’m currently using Michael Hyatt’s Full Focus Planner with pages for morning and evening rituals as well as work-day startup and shutdown rituals. 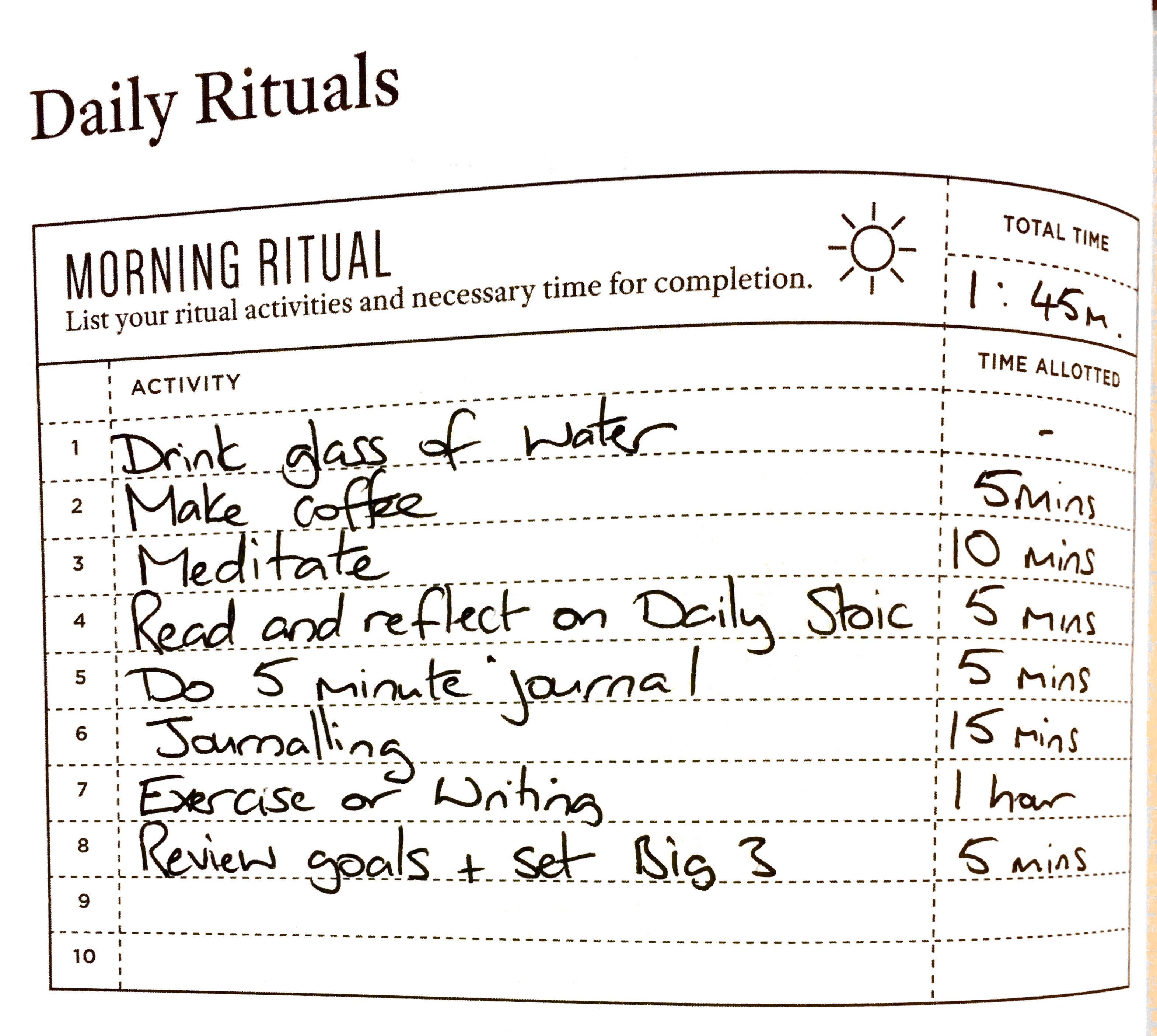 This is my current morning ritual as written in my planner.

The act of writing them down will help you to internalise them and making them visible will encourage you to act on them in a consistent way.

There’s no overnight fix, only daily persistence but you’ll find that there’s little willpower required once you’re in motion. Setting up consistent routines of positive habits give you powerful anchors that set the stage for you to do your best work each and every day.

Now, get off your backside and do something. Now. You have 5 seconds. Go.

If you want to make sure you don't miss out on my latest articles, you should subscribe to my monthly newsletter where I also share my latest thinking.

Got any questions or comments? Drop me a message on Twitter (@elaptics).